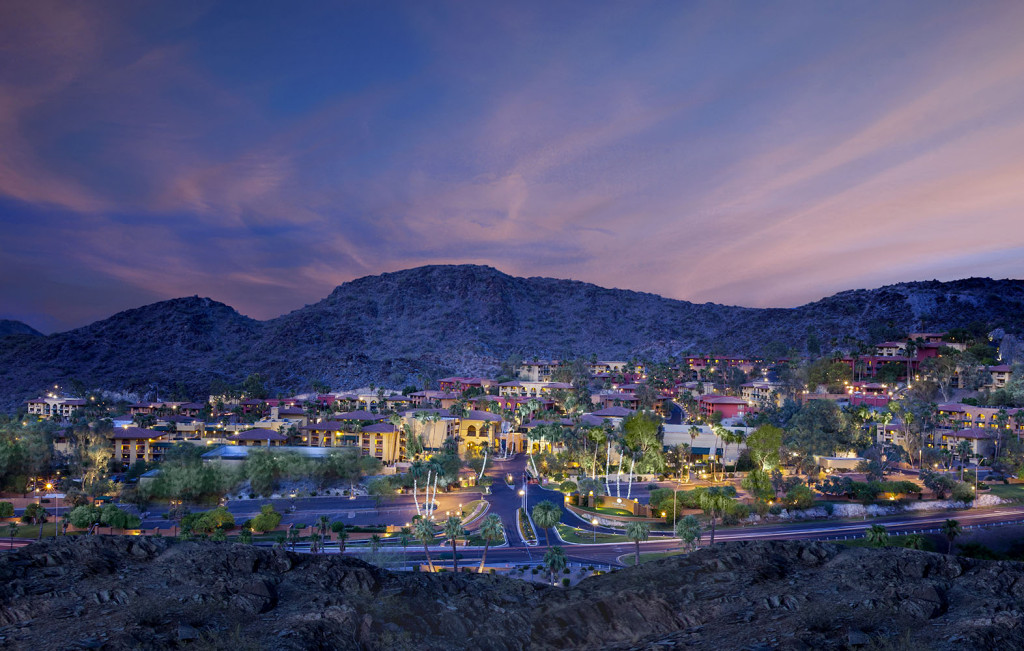 In the last year I’ve been called on to shoot signature photographs for a number of resorts.

A signature shot is used for the main identity of the resort or hotel. Some of the uses are for printed pieces, main photo on a website, billboards, ads etc. This is the one photo that has to intrigue and grab their audience to view other information in their promotional media.

I was hired to shoot a signature photograph for the Hilton Point Tapatio in Phoenix Arizona. This has got to have been the most difficult resort to get a signature shot of. First off the resort is probably 1/2 a mile long. Second it is built up into a mountain and is teared. Third it has large trees throughout the resort. And forth, in order to go to the resort you have to go up a steep incline. The first solution that I came up with  was to use a cherry picker so that I could get high enough to see over the buildings. In order to see the resort you had to back up to get some indication of size. The problem with using a cherry picker was that the more you backed up the lower in elevation you were, because of the incline. On top of that You can’t set up a cherry picker or lift on an extreme incline. At the bottom of the hill is the only place you could set up a lift but with an 80 Foot cherry picker you still can’t get high enough, and for  time exposures you would have movement from any wind at that height. Every solution I came up with wouldn’t work. The resort has been around for over 30 years and now I know why they didn’t have a strong signature shot. While scouting the property I shot a bunch of detail shots of their Architecture, fountains, and waterfalls. I shot anything that was of interest. Then I put together a composite to represent the resort. It was used  in some of their ads. The problem with the composite was it still didn’t show the resort. The director of marketing wasn’t happy. About a year later I was called back again to come up with another signature photograph. I was frustrated because of all the previous work and mental gymnastics I went through.

Years ago I learned a way of thinking. “ If you have a wall and you have to get over to the other side you would have to climb over the wall, if you couldn’t climb it you would try to go around it, if you can’t go around it you need to dig under it. And if that doesn’t work you need to rent a plane or helicopters  to fly over it “. There is always some solution to a problem. By the way blowing it up is not an option. :0)))

Unfortunately the helicopter idea wouldn’t work because of the time exposure  and you have to fly to high. Seeing roof tops just doesn’t cut it. The good news was , after going through the thought process and trying to think out of the box, I looked West, and there it was, a potential solution to the problem.

NORTH MOUNTAIN. I thought to myself if I climb the face of the mountain I can get any elevation that I would need. I decided  to climb the mountain to see if it would work and what problems there would be.  Anyway I climbed the side of mountain to the top and worked my way down until I found the perfect elevation. Then I waited for the sun to go down. No Problem, right. Well while waiting I got attached by either a bee, yellow jacket or a wasp.  Not sure what it was, but it stung me right in the socket of my left eye. I must have killed the sucker because he did his damage and either died or left the area. Anyway I stayed until it was dark enough to see what lights lit up in the resort. Now I had to get down the mountain in the dark. Thank god I was smart enough to bring flashlights and a hiking pole.

The shot was more than they had in their budget, but they need the shot. I was able to help them out with costs by guiding them on lighting the resort, the trees and the buildings. We used the resort rather than hiring a crew.

The original scout was in May, when it was cool outside. By the time we were able to shoot it, the temperature was about 110 degrees, HOT. Never fails now we had to deal with the heat.  When its hot out and you have concrete and black top you have a problem with heat waves. They could make the image less sharp. Also we had some major fires that made the atmosphere hazy. I was trying to plan the shoot around the weather. As luck would have it rained a day before the shoot. It also cooled off a bit.

To make a long story shorter, I got the shot. Most everything I needed lit was lit and the shot came off without to many problems. As for the bee’s , I bought hats with netting and everyone had to wear long sleeve shirts and long pants. When we went up the mountain it was windy and kept the bee’s away, but we were prepared !!! Pessimistic Optimism :0) 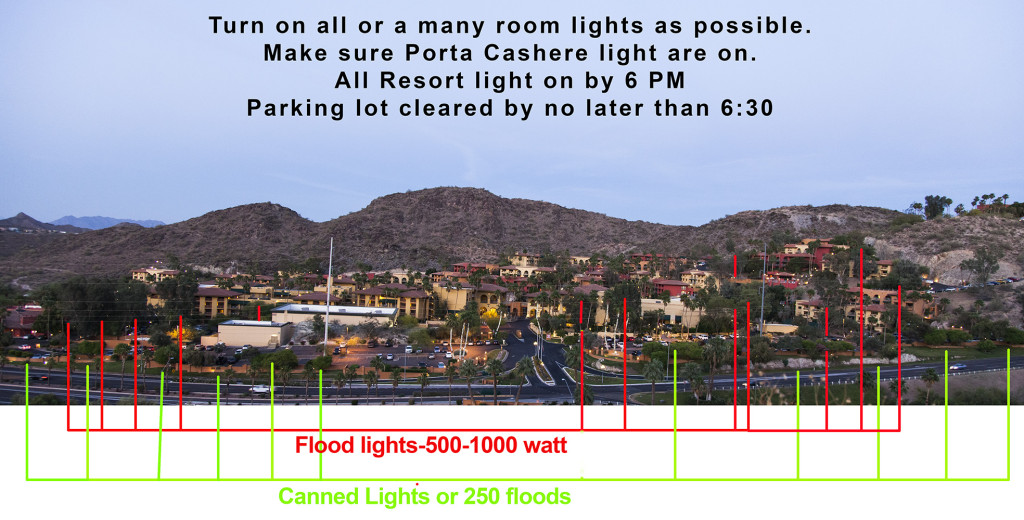